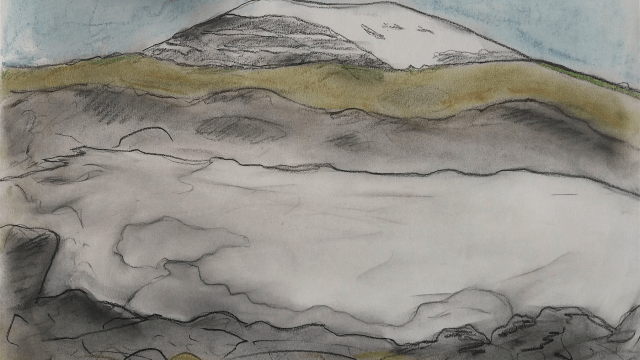 When I am out sketching I tend to use an A3 sketchbook because it gives me room to breathe. The materials are Derwent charcoals/graphite (they are tonal and in packs of 6) + my favourite pencil. The pencil is a Conté a Paris 2B (7010). It gets a really strong black line so there is no going back.

I usually do at least two drawings at a single location. The first one takes about 25 minutes and then I follow that with a very quick one (2 or 3 minutes). Often the quick one is the better sketch – which is rather annoying.

I have produced about 50 sketches in total. 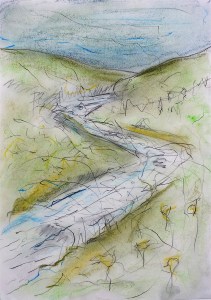 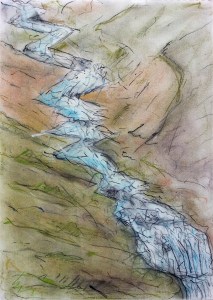 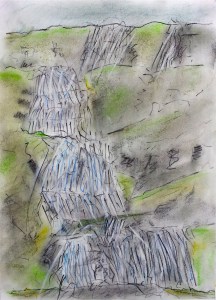 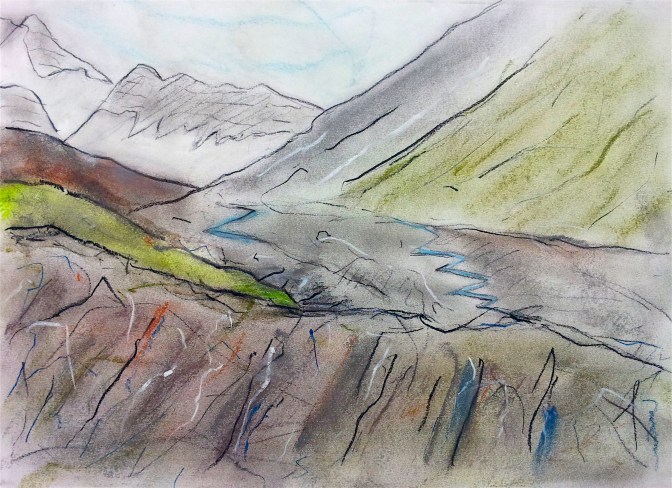 Artist David Goard explains how he surrendered to the purity of Iceland.

Iceland may be best known for volcanoes, thermal springs,knitted sweaters and Björk, but it also possesses a landscape that can inspire creativity. At least, that was the experience of north east artist David Goard, whose “Iceland – Before and After”paintings, drawings and film-based installation have been exhibited around the region. He’s returning to Iceland in July and for The Northern Correspondent he explained to curator Dominic Smith what makes it a place of transformation.

DS: How did you come to the decision to go to Iceland to work?

DG: I wanted to kick-start my creativity and I knew from my previous experiences that a residency was an ideal situation – because it puts you off balance in a creative kind of way. But I’d never been enamoured with landscape…artistically; so, when I was in Iceland, part of me was saying, “What am I doing here?” One of the things I did was to collaborate with another artist, a film-maker from Hong Kong called Kalun Leung. It was a performance piece. It was about my relationship with the landscape and, to some extent, how futile it felt to attempt to make art in such a beautiful place.

DS: What changed when you were there?

DG: There was an art centre there called Listhús. There were artists from all over the world, which was interesting…and you are flung together but the main focus of what you are doing is art. You are in an alien environment with people you don’t know so it forces your hand and it forces your mind. There I was in an amazing landscape but thinking of myself as a person that doesn’t like landscape art! That’s a conundrum. In the end I surrendered to the landscape. The most interesting thing about creativity is that you end up doing things that you don’t expect to do. I’m going back to Iceland because I don’t think I’ve quite finished but, at the same time, I’m nervous about returning to familiarity so I don’t think I will necessarily be doing the same thing.

DS: I know that you struggled with your initial drawings when you went there last time. Do you think that was because you planned to do them before you got there?

DG: Hmm. Yes. I took my brain with me but I should have left it behind! I know how to deal with the situation better now. Often, when you go somewhere, you secretly look at a timetable to find the way out!

DS: What have been some of the Before and After moments of your artistic career so far?

DG: When I have changed my situation – like leaving London or going to Iceland or whatever it might be – these are recognisable punctuations because something physical happened but then there are also Before and After’s in your brain which will be something to do with…this might sound a bit too serious…revelation – truly understanding something. I’m not sure to what extent people have that experience. It is talked about but the word tends to have a religious connotation – but you have creative revelations where you totally understand something – not by reading it in a book but by experiencing it. It’s like a one-ness. It can happen with music…or sport…not just art.

DG: The short answer is ‘I don’t know’. I think I would like to explore film further because I know less so there is more to learn. It’s the ‘fresh eye’ thing. I love painting but it is quite solitary.

I suspect I will look for creative reasons to come out of my studio now and then. At the moment I feel like I am waiting to go back to Iceland. It’s a unique place. The environment there…it’s very pure and when I go into that environment I feel happy. I’ll take it from there.

Comments are closed, but trackbacks and pingbacks are open.