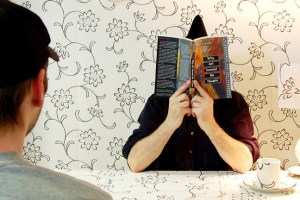 I trained as a painter but over the years my practice has diversified to include installation, light, sound, performance, posters, billboards, curating and the role of Lead Artist for Gateshead Council. I have exhibited widely in the UK and abroad.
As well as art, I have also been involved with music and I have collaborated with a number of musicians (usually online). More recently, I  have been working with film.
A major part of my career has been working as an artist-in-residence; consequently my experience of people is extensive and varied. I have also taught in colleges and universities at almost every level, including the Art & Design Foundation Course for the past 20 years. My involvement with formal teaching has came to an end in 2015 but I continue to enjoy working with people.
In August 2015 I was one of the artists-in-residence at Listhús, an international art centre in Iceland and in July, 2016 I was in residence at Herhúsid in Siglufjördur – and again in May, 2017. In October, 2017 two films were shown at the 2nd Western China International Art Biennale in Hohhot. I currently combine working in my studio with a role as a free-lance artist for BALTIC Centre for Contemporary Art in Gateshead.